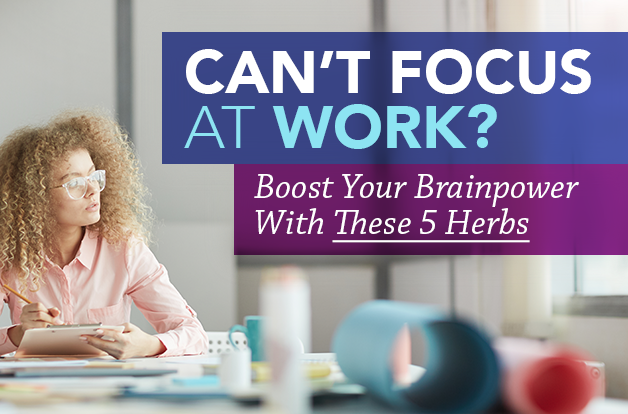 Can’t Focus at Work? Boost Your Brainpower with These 5 Herbs

With so many distractions whirling around us — social media, the 24-hour news cycle, constant notifications from tech devices, and for many during pandemic times, juggling your roles as employee and parent and teacher all at once — staying on task for an eight-hour workday can seem impossible. And you know how you think you’re being so much more efficient when you’re doing six things at once? Not so much. Shifting between tasks can cost as much as 40% of your productive time, according to the American Psychological Association.

Instead, to be more efficient, you need to tune out the distractions and hone your focus. Experts offer all sorts of tips for doing just that; some of our favorites:

Of course, learning how to avoid distractions takes practice just like adopting any new good habit does. But one thing that can help you get there faster is taking the right herbal supplements to clear your mind, improve your concentration, and keep you in the zone.

“The brain is basically a complex computer, and we tend to overload it, which interferes with cellular function,” explains Bill Rawls, M.D., medical director of Vital Plan. “But certain herbs can help boost the function of your brain cells — and all the cells in your body — by addressing the factors that regularly slow them down. That includes microbes like bacteria and viruses as well as free radicals (unstable atoms) that damage your cells and disrupt their ability to communicate effectively,” Dr. Rawls explains.

If you feel like it’s taking forever to get things done or that your attention keeps drifting when you’re at your desk, try incorporating these brain-boosting natural remedies into your daily life. 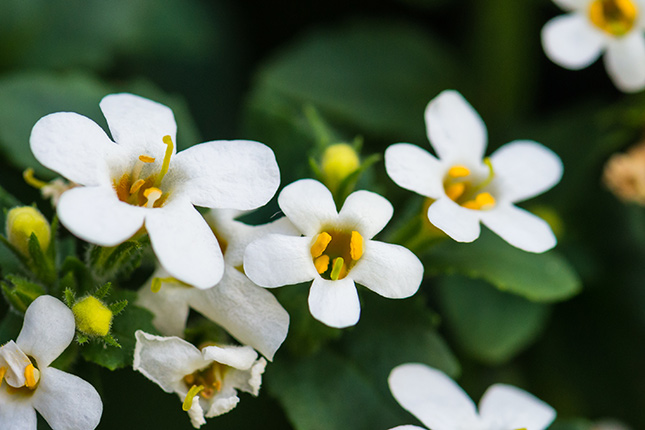 A plant that’s long been used in traditional Ayurvedic medicine, “Bacopa is known as a brain protector,” says Dr. Rawls. One of the most important ways it protects the brain is through its effect on choline.

Choline is a neurotransmitter that aids in the production and release of acetylcholine, a protein that carries signals among brain cells, explains Dr. Rawls. “There’s science that shows bacopa bumps up choline in the brain, in addition to positively affecting other neurotransmitters.”

When healthy adults took 300 milligrams of bacopa per day, their speed of processing visual information, learning rate, and memory all improved, a 2017 study published in the Annals of Neuroscience found. Bacopa also has antioxidant properties, decreases inflammation pathways in the brain, and enhances blood flow to the brain, according to a review in the journal Rejuvenation Research — all of which help keep your brain firing on all cylinders. 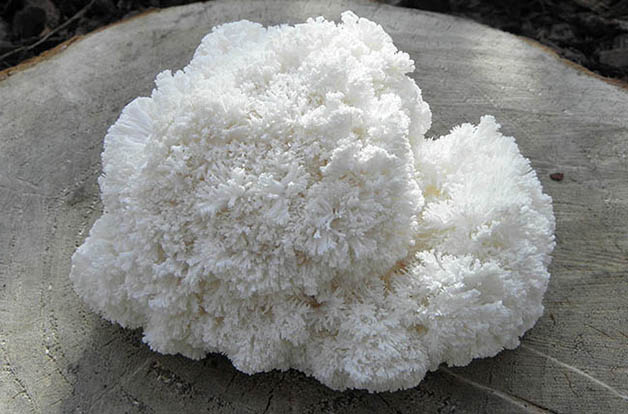 Lion’s mane is a type of edible mushroom that’s used in both supplements and in cooking — it has a delicious flavor and texture akin to lobster or crab. “Lion’s mane reduces inflammation and balances your immune system, and it also affects choline and other pathways in the brain that boost mental focus,” says Dr. Rawls.

Consuming powdered lion’s mane mushroom daily for four months was found to significantly improve mental functioning in older adults with mild cognitive impairment in a 2009 study published in the journal Phytotherapy Research. More recently, lion’s mane was shown to reduce symptoms of memory loss in mice in a study published in the International Journal of Molecular Sciences. 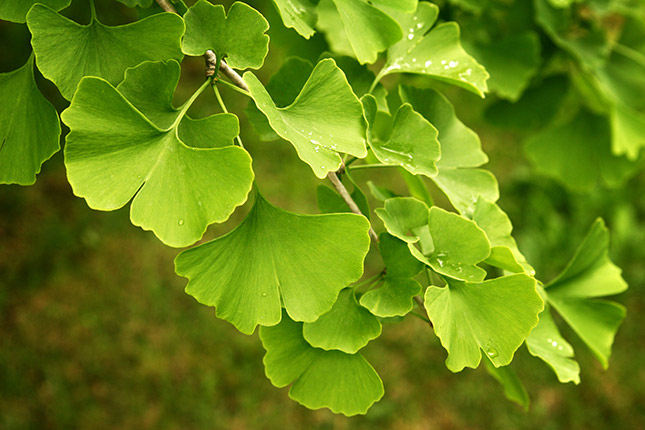 Ginkgo biloba, which comes from the leaves of a tree native to China, is well known for its circulation-boosting properties throughout the body — including in your brain. “Ginkgo biloba appears to dilate blood vessels, which enhances blood flow to the brain,” says Dr. Rawls. “That blood flow flushes out waste and gets cells the nutrients and oxygen they need to function and keep you sharp.”

When used in conjunction with conventional medicine, ginkgo extract may increase functional capabilities in those with mild Alzheimer’s, a 2016 review of 21 scientific studies discovered. But those benefits extend to healthy individuals as well: Older research has found that the herb moderately enhances a number of cognitive processes in younger people and those suffering from age-related cognitive impairment. 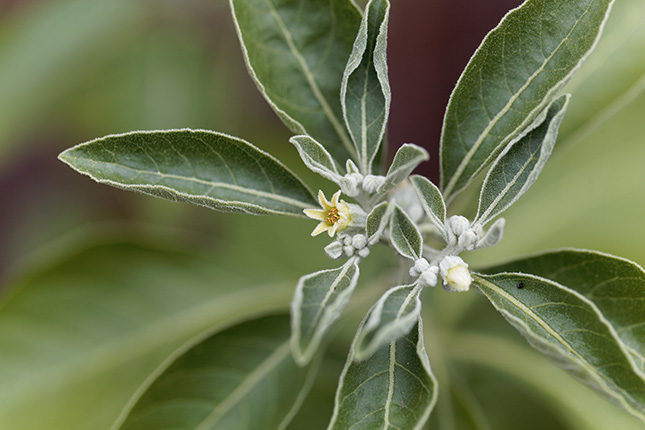 Ashwagandha, an herb native to India and Africa, has been used for thousands of years to enhance memory and improve cognition, says Dr. Rawls. “It helps balance the hypothalamus, a region of your brain that regulates important functions such as hormone levels, temperature, and sleep cycles,” he says.

So it makes sense that when your hypothalamus is out of whack, your body (and brain!) likely will be, too. “Think of it like your body’s thermostat: It helps match your internal environment with your external environment,” Dr. Rawls explains.

Taking 300 milligrams of ashwagandha root extract twice daily for eight weeks significantly improved memory, attention, executive function, and information-processing speed in a 2017 study published in The Journal of Dietary Supplements. And when older adults took 600 mg a day, they showed a significant increase in mental alertness, research published in 2020 in the Cureus Journal of Medical Science found. 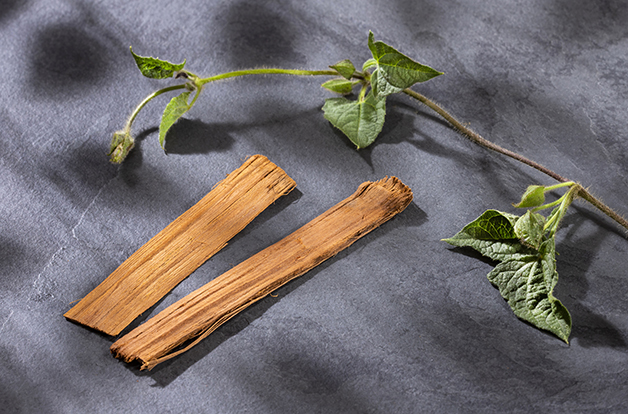 Throughout history, cat’s claw, which is derived from the inner bark of a thorny vine native to the Amazon, has been used to treat everything from arthritis to viral infections, says Dr. Rawls. Like ginkgo biloba, it’s a vasodilator, which means it increases blood flow to the brain. Recently, cat’s claw has been shown to help reduce brain fog and boost brain function.

Healthy adults who took a supplement containing cat’s claw bark powder had significant improvements in short-term memory and executive functions after six weeks, according to a 2016 study published in the journal Human Psychopharmacology. And a 2019 study from the journal Scientific Reports found that this herb’s anti-inflammatory and antioxidant properties reduced brain plaques and tangles, both of which are associated with memory problems and cognitive decline, especially in Alzheimer’s disease.

Though taking herbs won’t magically make you immune to distractions, they can help optimize how your brain functions so you’re better able to tune them out and get more done during your workday. Pair them with smart habits like time blocking and task batching, and you’re sure to see your focus and productivity soar.

Share117
Pin5
Tweet
122 Shares
About the Medical Director
Dr. Bill Rawls
Dr. Rawls is a licensed medical doctor in North Carolina and a leading expert in integrative health. He has extensive training in alternative therapies, and is the Medical Director of Vital Plan, a holistic health and herbal supplement company in Raleigh, NC.
You might also like...

5 Natural Ways to Protect Your Brain from Stress Your heart rate speeds up, and your breath turns shallow and quickens. Your muscles tense up; your eyesight sharpens. You feel more alert and excitable, and you usually get a… 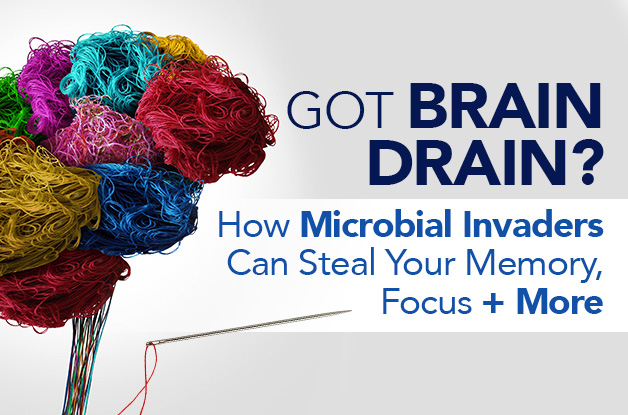 Got Brain Drain? How Microbial Invaders Can Steal Your Memory, Focus + More [su_spacer size="30"] You’ve likely heard about the microbiome as it relates to gut health, but did you know microbes — bacteria, viruses, fungi, and protozoa — occur in the brain…

5 Reasons You Really Need Omega-3s and the Best Way to Get Them Fat has a history of being the bad guy in the nutrition world (remember the fat-free craze of the ’80s?). Thankfully, the advice and discussion around dietary fat has become…
You might also like...

5 Natural Ways to Protect Your Brain from Stress Your heart rate speeds up, and your breath turns shallow and quickens. Your muscles tense up; your eyesight sharpens. You feel more alert and excitable, and you usually get a…

Got Brain Drain? How Microbial Invaders Can Steal Your Memory, Focus + More [su_spacer size="30"] You’ve likely heard about the microbiome as it relates to gut health, but did you know microbes — bacteria, viruses, fungi, and protozoa — occur in the brain…

5 Reasons You Really Need Omega-3s and the Best Way to Get Them Fat has a history of being the bad guy in the nutrition world (remember the fat-free craze of the ’80s?). Thankfully, the advice and discussion around dietary fat has become…
What's your Vital Plan?
Get your free personalized supplement recommendation. Take the survey »
follow us
JOIN OUR NEWSLETTER
For weekly tips & healthy recipes