Prickly ash is a medicinal tree that grows throughout the Southern United States. It is a warming plant with broad-spectrum antimicrobial properties and can be used both internally and topically for fighting infections, supporting digestive issues, improving circulation, soothing pain, and improving the absorption of other ingredients within an herbal formula.

What is Prickly Ash?

Prickly ash is a small tree native to North America, growing in the understory of moist forests and often found alongside fence rows. In the spring, small green flowers bloom before leaves break through. Despite having the word “ash” in its name, prickly ash shares no relation to the common ash found in the olive (Oleaceae) family, but it, in fact, belongs to the citrus (Rutaceae) family. The berries and leaves are aromatic, with a scent similar to lemon. Most notably, the trunk and branches are covered in large, thick spines that protrude from corky warts. Thus, this plant has been said to resemble Hercules’ club or clava-herculis in Latin.

Prickly ash has enjoyed much esteem as a medicinal plant in North America with a long history of use by Native Americans, and later, by Western herbalists and some physicians of the late 19th and early 20th centuries. It contains a wide variety of active phytochemical constituents, which give it a broad range of therapeutic uses. 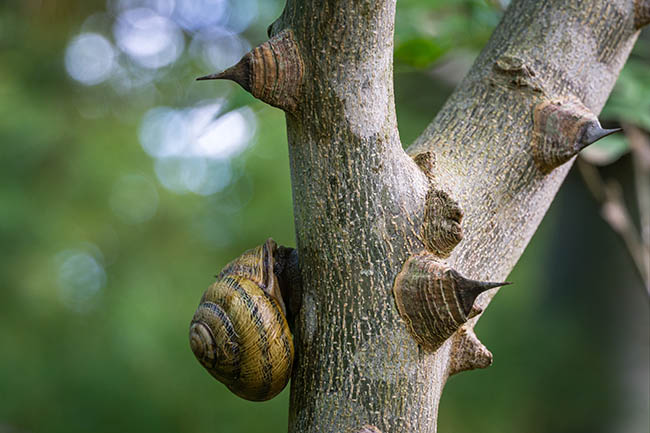 Large, thick spines protruding from the corky bark of a prickly ash tree.

Benefits of Prickly Ash and How It Works

Prickly ash brings warmth and increased activity to the stomach, stimulating secretions of saliva, mucus, and hydrochloric acid in the upper digestive tract. It also stimulates pancreatic, hepatic, and gallbladder secretions, making it a helpful ally in the digestion of food.4,2 While both the bark and berries are considered carminatives that help with cramping and tension in the stomach, the berries are slightly more effective for this purpose.1 Prickly ash is also used in cases of constipation, diarrhea, gas, and other digestive complaints. 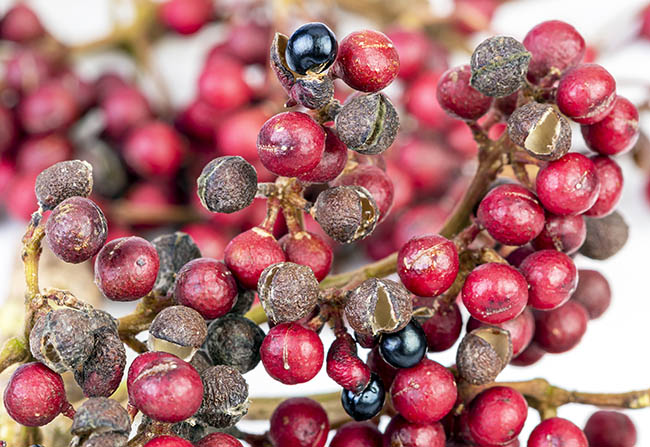 Prickly ash berries are often used for their antispasmodic and carminative actions.

Prickly ash has shown antimicrobial properties in its historical use as well as recent studies. The plant was used extensively by the Eclectic physicians of the late 19th and early 20th century for gastric bacterial infections such as cholera.5

Chelerythrine, a phytochemical present in the bark of prickly ash, works against candida and a variety of gram-positive bacteria such as Staphylococcus aureus (“staph”), bacteria commonly found on the skin and in the nose, armpit, and other areas. Though usually harmless, S. aureus can turn into an antibiotic-resistant infection known as MRSA. An in vitro study of prickly ash bark extract showed growth inhibition of MRSA, with chelerythrine being the major active principle.6

Prickly ash is considered a warming plant, as it has the ability to dilate blood vessels and stimulate circulation. It is especially well-suited for congested and stagnant systems common in people with chronic inflammation, impeded lymphatic flow, and excessive immune responses.

Prickly ash can be used internally and topically for varicose veins, spider veins, and hemorrhoids. The recovery of bruises and pain due to sluggish circulation can also be supported by this plant.4

The circulatory benefits of prickly ash extend to the brain, providing increased cerebral blood flow and oxygenation. In this way, it may be helpful for individuals living with Alzheimer’s and dementia.4

Both external and internal use of prickly ash can help relieve lower back pain, muscle pain, and nerve pain as is commonly experienced in fibromyalgia, Lyme disease, and other chronic conditions.1,2,5 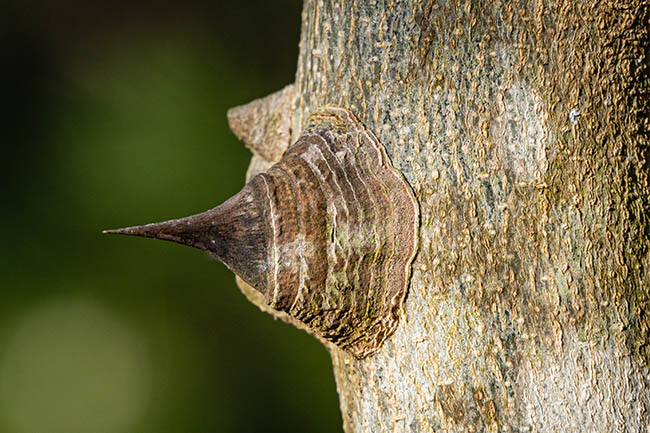 The bark of prickly ash contains chelerythrine, a compound that’s been shown to have antimicrobial and anti-inflammatory effects in the body.

To reduce the pain of a toothache, prickly ash bark can be chewed, or the powdered bark may be applied to the gums.8 The stem bark contains herculin, a phytochemical with local anesthetizing abilities.4

The bark, berries, and root of prickly ash have a long history of use in North America. Considered a panacea by Native Americans, at least 12 tribes used prickly ash as a remedy for colds, coughs, fevers, and toothaches.4

Its popularity as an indigenous remedy influenced its prominence in Eclectic medicine, a branch of American medicine popular in the late 19th and early 20th century that utilized non-invasive and botanical therapies. During this time, prickly ash was used to relieve chronic pain, digestive upset, sluggish circulation, skin disorders, and more.4

Known as Tumburu in Ayurveda, a traditional medical system of India, the native species prickly ash is used as a powerful toxin-destroying herb. It is recommended for the gastrointestinal tract when candida and/or parasites are present. Ayurvedic traditional medicine also utilizes prickly ash for arthritic conditions. Its blood purifying and stimulating effects bring fresh oxygenated blood to joints while detoxifying cellular waste that can contribute to joint discomfort and stiffness.9,10

The berries of the Zanthoxylum bungeanum species, native to China, are the most popular commercial product of the Zanthoxylum genus typically used in Traditional Chinese Medicine (TCM). Known as Hua Jiao, Sichuan pepper, or Chinese prickly ash, it has been a part of Chinese cooking and medicine for more than 2000 years. Recent research shows that Z. bungeanum has analgesic, anti-inflammatory, antifungal, and antibacterial actions similar to the species used in the west. This species is used in TCM for abdominal pain, indigestion, parasites, eczema, and more.11

The bark and berries of prickly ash are most commonly prepared as medicine. Both Zanthoxylum clava-herculis and the northern species Zanthoxylum americanum can be used interchangeably.

For internal use, prickly ash is often taken as a tincture. 1 mL of prickly ash tincture (bark or berries) can be consumed up to three times daily.

For topical use, an infused oil, salve, diluted tincture soak, or poultice made from powdered bark can be applied to the affected area. These types of preparations are preferred when working with slow-healing wounds, muscle or joint discomfort, and varicose or spider veins.

As a digestive aid, prickly ash works well with ginger. For candida, it is commonly combined with bitter herbs like goldenseal (which contains berberine), andrographis, or neem.9

As an antimicrobial, prickly ash may be used with other antimicrobial herbs such as neem, cryptolepis, houttuynia, andrographis, or cat’s claw.

Prickly ash may theoretically interfere with anticoagulant medications.7 Also, it may increase absorption of certain pharmaceutical medications with a narrow therapeutic index — where small changes in a drug’s dose can be dangerous, such as blood thinners.

Do not use prickly ash during pregnancy and breastfeeding. Avoid its use if acute stomach or intestinal inflammation is present. Discontinue prickly ash if it causes acid indigestion, hot flashes, or night sweats.