Passionflower is a beautiful climbing vine that’s as pacifying to look at as it is to consume. Taken orally, passionflower promotes relaxation and calm and has long been used to maintain a healthy nervous system and support restful sleep.

Passionflower is a perennial herbaceous vine with trident shaped leaves, fruit about the size of a duck egg, and beautifully intricate flowers that open and close with each day. While there are over 550 species in this genus, many of which are called passionflower, only this species, Passiflora incarnata, has a strong history of use in herbal medicine traditions, and others may be toxic or at least less therapeutic. A close relative of the cultivated passion fruit (Passiflora edulis) that is commonly eaten in Central America, passionflower produces fruits with a similar taste, though less sweet.2

When Spanish missionaries first noticed passionflower, they felt that the arrangement of the flower parts symbolized the Passion of Christ, hence the Latin name. Before European contact, however, passionflower has long been an essential plant to Native Americans for both food and medicine and is also an ecologically important plant, well-loved by many pollinators.

Today the aerial plant parts (leaf, vine, and flower) are used primarily to help support a healthy and calm nervous system as well as to promote normal sleep without causing any next-day grogginess.3 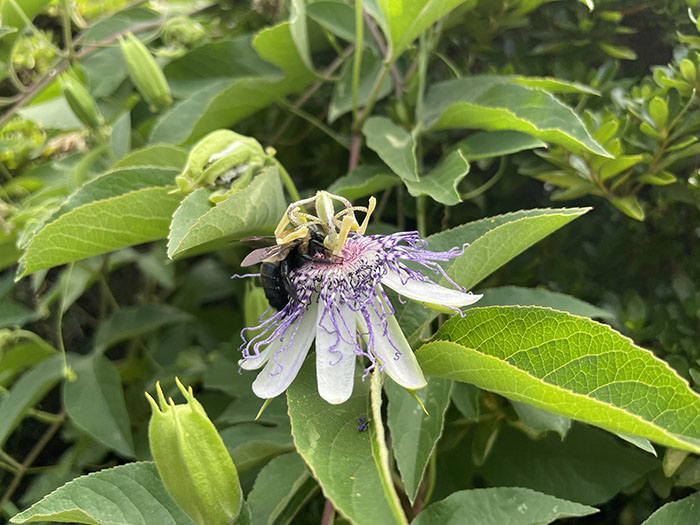 Pollinators are fond of passionflower and frequently found working their magic beneath the dangling anthers. Here a bee migrates from flower to flower pollinating and gathering the raw material for honey and wax. Photo: Tim Yarborough 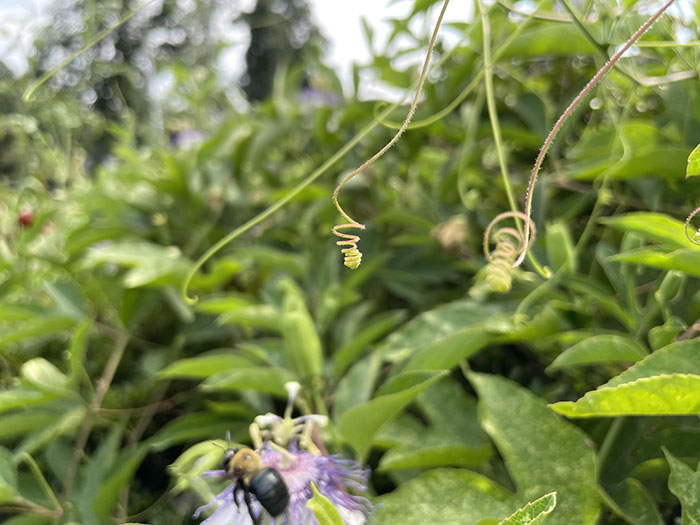 Spiraling tendrils of a passionflower vine reach to climb over any nearby support. Here passionflower has formed a dense blanket of vegetation over a group of azalea bushes in full sun. Photo: Tim Yarborough

Benefits of Passionflower and How It Works

Passionflower is known in herbalism as a nervine; an herb that relaxes tension and eases anxiety by soothing both the body and mind.4 Nervines, especially in combination with adaptogens, are a powerful antidote to stress.

Passionflower herb is also thought to boost levels of GABA, a calming neurotransmitter that inhibits specific brain signals and decreases activity in the nervous system. This can promote relaxation and help with feelings of anxiety, stress, and fear.6,7

Small human studies confirm the historical use of passionflower for generalized anxiety. It was also found to have minimal or no job impairment side effects compared to certain anxiety medications.8

In another human clinical trial, patients were given a passionflower supplement prior to surgery and had significantly lower anxiety scores heading into the procedure without losing psychomotor function.9 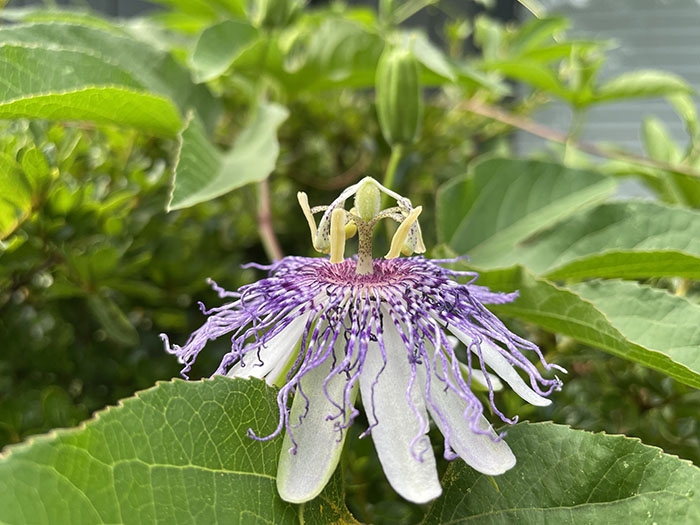 Close up of Passiflora incarnata, with the corona in purple, five yellow anthers, and 3 purple-spotted styles coming from the ovary.

An agitated nervous system is one of the biggest barriers to getting good sleep, especially when the mind gets stuck ruminating on repeating, unsettling thoughts. Enter passionflower. Thanks to the nervine qualities mentioned above, passionflower promotes better quality sleep by supporting and calming the nervous system.

A double-blind, placebo-controlled human study on passionflower for sleep quality showed benefits for healthy adults, confirming its use in Western herbalism for sleep support over the past 150+ years.10

Clinical use of passionflower indicates that it may help relieve stress-induced headaches, likely due to its hypotensive and calming qualities.

Passiflora has also been used to support individuals with ADHD. One small clinical study of children with ADHD found that taking passionflower for 8 weeks was comparably as effective as taking the drug methylphenidate, aka Ritalin, but without the same negative side effects.11

While more research is merited, a human opiate detoxification study found that using passionflower as an adjunct to clonidine, the primary treatment for opioid dependence, significantly improved the management of mental symptoms throughout the 14-day process.12

Preliminary animal research indicates that there may be similar benefits for use with alcohol withdrawal.13 These findings support the use of passionflower in some traditional medicine systems for helping manage withdrawal symptoms. 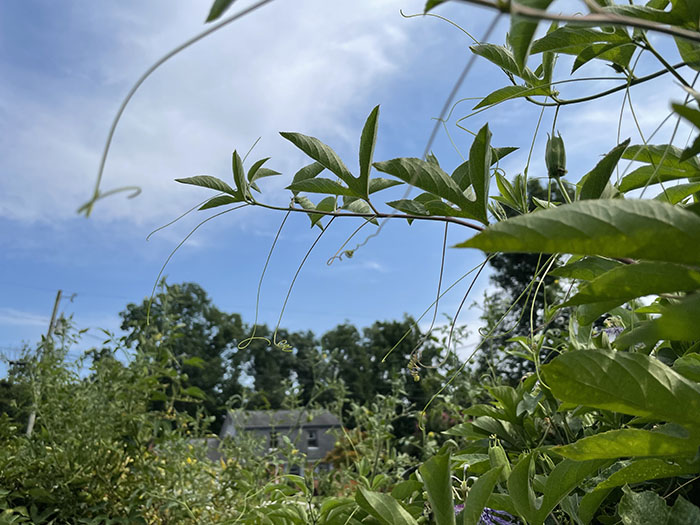 Passionflower leaves and stems are both used medicinally in Western herbalism and modern botanical medicine. Leaves are typically 3-lobed in the shape of a trident but may also be found with 5 lobes. Photo: Tim Yarborough

Cherokee Native Americans used the root as a poultice for inflammation and minor skin ailments such as boils and scratches and they cooked and ate the young leaves.14 While passionflower was likely not a staple food source, many native groups of the Southeastern U.S. enjoyed the late summer fruit, which could be opened and eaten straight or made into juice thickened with cornmeal to create a cooling beverage.15 This practice was later adopted and modified by Westerners who made a syrup from the fruit as a cooling agent for fevers.

An almost ripe passionflower fruit in early August in Raleigh, NC. As summer comes to a close, the skin will start to wrinkle and turn more yellow or brown and become heavier when ripe. Photo: Tim Yarborough

In 1787, surgeon Johann David Schoepf documented using the leaf as an antispasmodic for the “staggers or epilepsy” during the Revolutionary War. The herb made its way to Europe during this time, where it gained popularity, and its use as a nervine was first pioneered.

It was later repopularized in its native land by Dr. L. Phares of Mississippi, who recorded using it in 1840 as a sleep aid and mild nerve sedative. Eclectic physicians of the late 19th and early 20th century, known for using botanical remedies, continued using passionflower for insomnia, nervousness, spasmodic conditions, and mental worry, especially for overworked individuals.16

While the fruit may be cultivated or wild foraged and enjoyed as food, the most medicinal parts of the plant typically used are the vine, leaves, and flowers. Passionflower extracts such as a water-alcohol extract or dried powder extract typically yield the most potent therapeutic effects.

Passionflower tea may be made by steeping 1-2 tsp. of the dried herb in 1 cup of hot water for 20-30 minutes and taken 2-4 times per day. This grassy, earthy-tasting tea does well with the addition of a bit of honey. 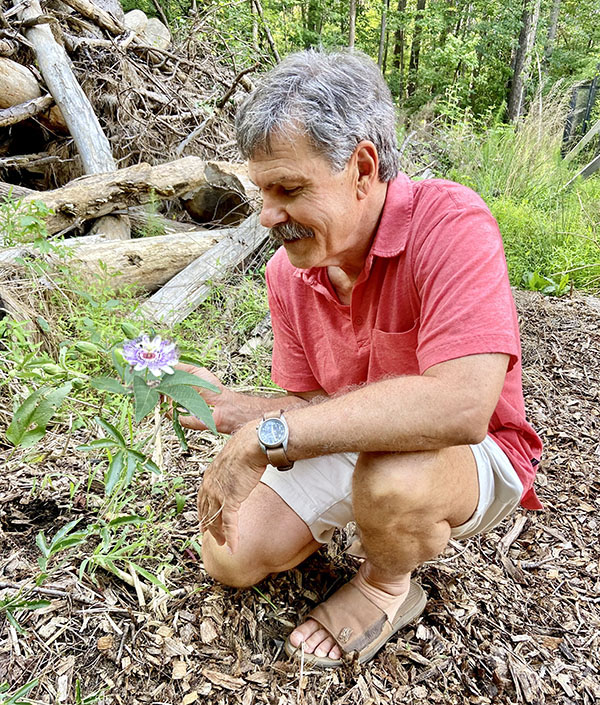 If using a tincture, general dosing ranges from 3 to 4 mL up to 4 times per day.

For powdered extract capsules, look for products standardized to 3.5% vitexin. Vitexin is one of the notable phytochemical constituents in passionflower that has hypotensive properties and is often used as a marker of product potency. Depending on the product quality, concentration, and whether or not it’s being used in combination with other herbs, general dosing ranges for the extract are between 250 mg to 500 mg, 1 to 2 times daily.

For sleep support, take passionflower before bedtime and again if needed during middle-of-the-night awakenings. For this use, consider pairing passionflower with L-theanine, lemon balm, GABA supplements, melatonin, and CBD.

For anxiety, nervous system, and mood support, passionflower may be taken during the day or stressful periods, as needed. For this purpose, consider other herbs and ingredients such as ashwagandha, bacopa, reishi, lion’s mane, ginkgo, and gotu kola.

There are theoretical concerns that passionflower may potentiate the effects of prescription sedatives and anxiety medications, so caution is advised if using them together. Avoid use with older type antidepressants such as MAO inhibitors.

Always check with your healthcare practitioner before use if you are taking medications. For more general education on potential interactions between herbs and medications, check out this article by Vital Plan’s Medical Director, Bill Rawls, MD: Is it Safe to Take Herbs with My Medications?

The safety of using passionflower during pregnancy is unknown, so it’s recommended to avoid it during this time.

While passionflower is generally considered safe, it may cause drowsiness, so avoid using heavy machinery or driving until you know how strongly the herb affects you. 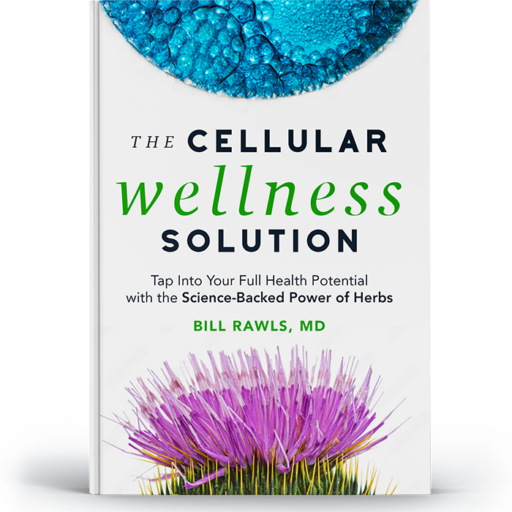 *This statement has not been evaluated by the Food and Drug Administration. This product is not intended to diagnose, treat, cure, or prevent any disease. Always consult your qualified healthcare provider before beginning any diet or program.
Share
Pin1
Tweet
1 Shares
About the Medical Director
Dr. Bill Rawls
Dr. Rawls is a licensed medical doctor in North Carolina and a leading expert in integrative health. He has extensive training in alternative therapies, and is the Medical Director of Vital Plan, a holistic health and herbal supplement company in Raleigh, NC.
What's your Vital Plan?
Get your free personalized supplement recommendation. Take the survey »
follow us
JOIN OUR NEWSLETTER
For weekly tips & healthy recipes