Well known as a beautiful golden spice, turmeric is a plant native to India and Southeast Asia with thousands of years of culinary and medicinal use. Its rhizome, commonly referred to as “roots,” is heavily researched and can benefit many systems of the body primarily due to its broad-reaching anti-inflammatory properties. 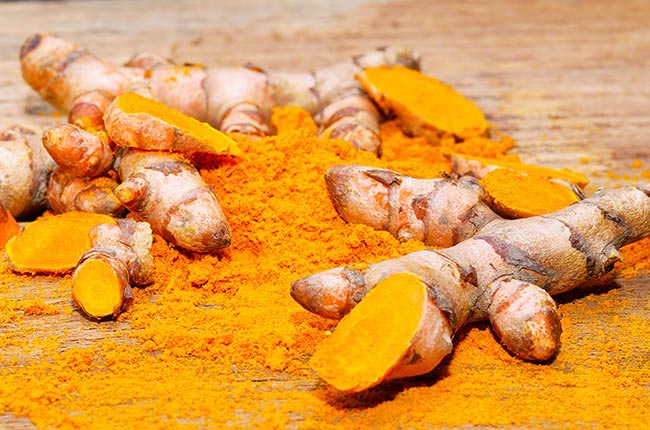 Turmeric is a tropical plant whose vibrant green leaves and spikes of yellow flowers are just as mesmerizing as its more popular golden rhizomes. Indigenous to India and Southeast Asia, this member of the Zingiberaceae (ginger) family has been used as a spice, medicine, and dye for thousands of years. 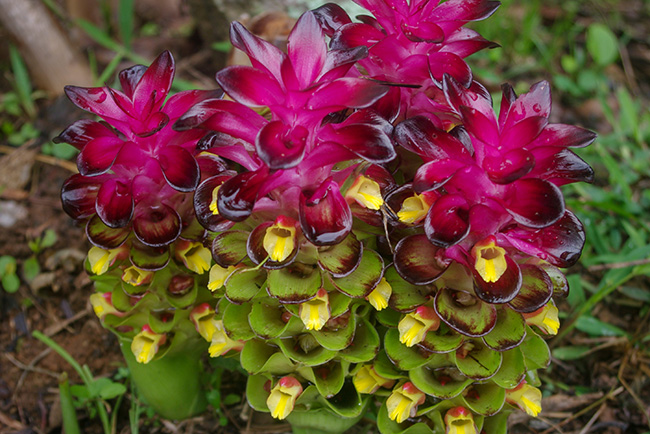 Yellow tubular flowers pop out from surrounding green and pink modified leaf structures called bracts. Sometimes, these modified leaf bracts may be as bright or brighter than the flowers of a plant as seen here with turmeric.

The rhizomes, commonly referred to as “roots,” are cultivated for various uses. These rhizomes grow horizontally underground and are tuberous with rough skin. Their interior is a brilliant orange that, when dried and ground, transforms into the turmeric powder so many of us are familiar with today.

Turmeric houses an abundance of powerful bioactive compounds responsible for its wide-ranging health benefits. The rhizome contains phytochemicals called curcuminoids, which give this part of the plant its characteristic orange-yellow color.

The antioxidant and anti-inflammatory compound curcumin is just one of these curcuminoids. The rhizome also contains aromatic compounds called terpenes, like turmerone and zingiberene, which have antimicrobial activity, among many other effects.

Although turmeric is often recognized for its anti-inflammatory action, it offers a diverse variety of beneficial physiological effects that support many systems of the body. 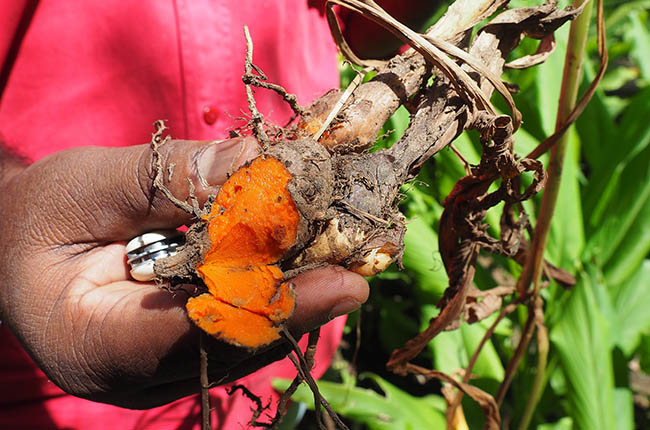 Turmeric rhizomes are the main powerhouse of medicinal activity in the turmeric plant. Rhizomes are underground stem structures that can shoot up new plant sprouts or new roots depending on what’s needed by the plant.

Benefits of Turmeric and How It Works

Turmeric’s antispasmodic and carminative actions soothe a stomach overcome with bloating, cramping, and gas. This plant further supports the gastrointestinal tract by increasing bile production, which improves digestion of fats and absorption of nutrients.1,2

But its affinity for digestion does not stop there. Turmeric can protect stomach cells by increasing gastric mucus.3,1 In one small clinical study, patients with peptic ulcers were given 3 grams of encapsulated turmeric for 12 weeks. The dose was split throughout the day and taken before meals and bedtime. After 12 weeks of treatment, 76% of cases did not have ulcers.4,5

Turmeric can also help balance the gut microbiome through its antibacterial, antifungal, and antiviral properties that suppress unfriendly microbes.1,6 In vitro and in vivo studies show that curcumin can help fight Helicobacter pylori (H. pylori), a bacteria that infects the stomach and is associated with stomach ulcers, as well as reduce the inflammation and gastric damage it causes.7,8

Recently, turmeric’s claim to fame has been its potent anti-inflammatory effect. Numerous clinical trials show turmeric’s success in managing pain and inflammation. It is thought to do so through various mechanisms, including inhibiting activation of NF-κB and COX-2 pathways, which reduce proinflammatory hormone-like compounds called prostaglandins involved in the inflammatory process.1,6,10

Nonsteroidal anti-inflammatory drugs (NSAIDs) also inhibit COX-2 to reduce pain and inflammation. However, they also have a range of potential negative effects (especially with long-term use) that increase the risk of ulcers, kidney, and cardiovascular problems.

In addition, turmeric is rich in potent antioxidants, which neutralize free radicals and acids that account for most of the damage caused by inflammation.

This anti-inflammatory effect can be helpful throughout the body but has demonstrated significant benefits in cases of arthritis. A systematic review of ten human studies showed turmeric extract to improve pain and function in individuals with knee osteoarthritis compared to a placebo.9

Turmeric can be combined with an anti-inflammatory diet and other anti-inflammatory herbs like boswellia for arthritic conditions for an even greater effect. A double-blind, placebo-controlled, cross-over trial found an herb/mineral preparation of turmeric, ashwagandha, boswellia, and zinc to significantly reduce pain in osteoarthritic patients.10,3

Curcumin, a compound in turmeric responsible for its golden yellow pigment, is liver-protective. Animal studies have demonstrated curcumin’s ability to increase antioxidants like glutathione in the liver.10 Furthermore, turmeric can enhance liver detoxification, which may be helpful in protecting the body from environmental toxins, heavy metals, and toxicity induced by alcohol and prescription drugs.1,10

Turmeric is able to regulate and stimulate bile, which is stored in the gallbladder and secreted by the liver. Healthy bile flow supports the liver in eliminating toxins and waste from the body.11

For liver protection, try combining turmeric with herbs like milk thistle or schisandra, which also have potent hepatoprotective properties.

Curcumin is immunomodulating, able to regulate an overstimulated immune system, which is frequently characterized by excessive inflammatory responses common in disorders such as allergies and autoimmune diseases. It does this through its targeting of various cell-signaling pathways, including growth factors, cytokines, transcription factors, and genes that regulate cellular proliferation and cell regeneration.12,13

Curcumin’s antioxidant and anti-inflammatory capabilities have been the subject of much recent research on cancer. In vitro and in vivo studies have demonstrated turmeric’s antitumor activity against many types of cancers.12,14 In a human clinical trial, follicular lymphoma patients were administered either chemotherapy, chemotherapy and curcumin, or chemotherapy, curcumin, and EGCG, a green tea extract.

The study found that curcumin and EGCG had synergistic antitumor activity that, in combination with chemotherapy, achieved long-lasting remission in 60% of patients.15 The more than 1400 studies on cancer, curcumin, and turmeric on PubMed.gov are a testament to the growing interest among patients and healthcare providers in additional supportive and holistic therapies for this challenging illness.

Turmeric has many uses for the skin: In India, it’s traditionally applied as a paste made with the powdered herb and honey. People in many South Asian countries utilize turmeric for cuts, burns, and bruises. It is also used this way in Pakistan and Afghanistan, where it is applied to wounds to speed recovery. Turmeric, especially when combined with honey, supports this process by shielding wounds from infection, reducing excessive inflammation, and promoting new tissue formation.6,16

In traditional medicine systems like Ayurveda, turmeric is used to improve circulation and move stagnant blood. For this reason, and perhaps its anti-inflammatory effect, it is applied to bruises, strains, and sprains to reduce pain and swelling.

Turmeric’s antimicrobial properties can be helpful in fighting skin infections like ringworm.3,2,1

Turmeric possesses neuroprotective activity associated with its antioxidant and anti-inflammatory effects. Inflammation, both in the brain and gut, is a key driver in numerous cognitive issues. The extract has shown some potential in deterring and managing neurodegenerative conditions, including Alzheimers.4,6,17,10

Turmeric has long been used as a spice in South Asian and Middle Eastern cooking. It is a significant ingredient in curry, lending its distinctive flavor and yellow color to the dish. In India, turmeric is used in religious ceremonies and weddings to dye fabrics and anoint the skin.6,3,1 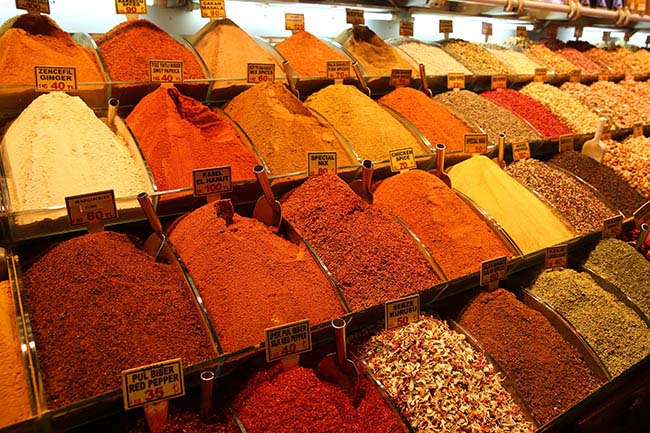 Beyond its culinary popularity, turmeric has been regarded as an important herbal medicine throughout various cultures for thousands of years. In Ayurveda, a traditional medicine system of India, turmeric is thought to strengthen the overall energy of the body and is specifically used to support digestion and the liver, regulate menstruation, manage respiratory ailments, relieve arthritis, and manage skin disorders.6,3

In Unani medicine, another traditional system of healing observed in West and South Asia, practitioners use turmeric to expel phlegm and improve circulation.6

In Thailand, some traditional medicinal uses of turmeric include managing stomach ulcers, skin disorders, and the common cold.3

Turmeric’s rhizomes (commonly referred to as turmeric root) can be prepared as a tea or tincture, taken as capsules, or applied topically.

To make a turmeric tea, simmer one ounce of fresh or dried turmeric rhizome and 32 ounces of water for 30 minutes. Strain and enjoy one cup up to three times daily. Alternatively, a teaspoon of the dried powder can be mixed into a cup of hot water and steeped for 45 minutes.

Generally, 1.5 mL to 4 mL of turmeric tincture is taken up to four times daily.

When taking turmeric capsules, look for a full-spectrum powdered extract that includes a full spectrum of phytochemicals, including curcuminoids and turmerones. 250-500 mg of standardized turmeric capsules are often consumed up to three times daily.

For all-around daily health support, consider taking turmeric with other herbs such as shilajit, gotu kola, rhodiola, and reishi.

For topical use, powdered turmeric can be combined with honey or plain greek yogurt and applied to the skin.

Additionally, turmeric has a long history of culinary use and makes a flavorful addition to smoothies, soups, sauerkraut, and rice dishes.

Turmeric has a low risk for interactions with most medications and is generally well-tolerated.

There are conflicting claims about turmeric’s potential to affect blood-thinning medications and certain cancer treatments. Turmeric and isolated curcumin extracts have been shown to affect CYP3A4 and CYP2D6 liver pathways, which could affect drugs metabolized by these pathways, however, research results provided mixed opinions on whether or not this is of clinical concern.

Therefore, always check with your healthcare practitioner before use if you are taking medications. For more general education on potential interactions between herbs and medications, check out Dr. Bill Rawls’ article: Is it Safe to Take Herbs with My Medications?

Turmeric is generally well tolerated, and in human studies, no negative side effects were experienced by patients taking dosages of up to 8 grams daily while most people using turmeric consume just 1-3 grams daily.

Avoid doses of turmeric greater than 2,000 mg (2 grams) daily during pregnancy as there are traditional medicine recommendations against using it while pregnant. That said, normal amounts used in cooking should not pose any issue.

Turmeric can bind with iron in the gut and thus could potentially contribute to an iron deficiency when taken ongoing, particularly in people with low iron levels.21

Turmeric contains significant levels of oxalates and thus should be avoided by people with calcium oxalate kidney stones or others on a low-oxalate diet.

There are theoretical concerns that turmeric’s bile stimulating effect may be contraindicated in individuals with biliary obstruction.

Note that when working with turmeric, it can stain skin and other objects a vivid yellow.